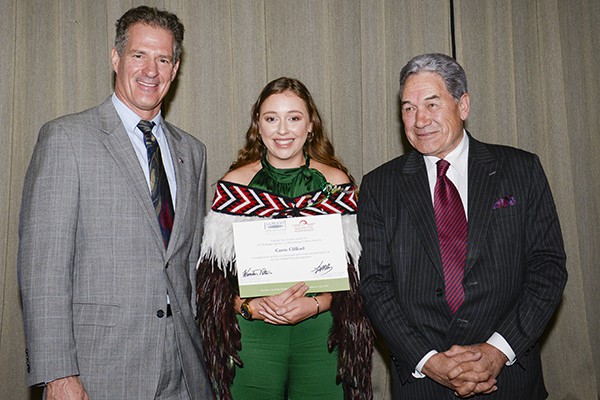 Carrie Clifford, from Gore, graduated from the University of Otago with a BSc in Psychology in 2015 and a BSc (Hons First Class) in 2016. Carrie was honoured alongside other 2019 Fulbright Award recipients at the Fulbright New Zealand Awards Ceremony on 17 June, hosted by Deputy Prime Minister Rt. Hon Winston Peters at Parliament Banquet Hall in Wellington.

Carrie leaves for the US in July, and will be there for over ten months to undertake research in to Indigenous conceptualisations of child development, mental health, and treatment at two US institutions – the University of Colorado in Denver, Colorado and John Hopkins University in Baltimore, Maryland. Her research is towards a PhD she will complete with the University of Otago.

“As a young Māori scholar, being supported to visit the US for research really appealed to me – this award allows me to travel overseas and gain international experience, and to then complete a PhD in Aotearoa, alongside Māori communities and academics.”

The Fulbright-Ngā Pae o te Māramatanga award will allow Carrie to spend time with leading clinical psychologists in the US who are focused on child and adolescent development. At the University of Colorado she will be working alongside Professors from the Centers for American India and Alaska Native Health.

When she returns to New Zealand, Carrie will be focusing her research on improving culturally-responsive clinical practice and developing Māori approaches to mental health, and has been exploring using pūrākau (storytelling) in clinical settings with children.

“My mahi aims to move away from a deficit approach to mental-health, with a current focus on diagnosis and labels, towards empowering our whānau to understand the difficulties they are facing. We must build upon the strengths and resources whānau have, and allow whānau to reconnect with their culture,” she says.

Carrie grew up in Gore, in a farming family. She says that in recent years she has learned more about her Waitaha tipuna, which has inspired her through her education journey.

“My tipuna, Waitaha chief Haimona Rakiraki gifted land to establish a school in the late 19th century at Kaka Point, in the hope that his descendants would be educated and stand strong in both Te Ao Māori and western world” she says. “My parents hope too was that their children would be the first generation to finish school and go to university.”

NPM Co-Director and past Fulbright alumni Professor Jacinta Ruru comments “Everyone here at Ngā Pae o te Māramatanga wishes Carrie all the best. She is an outstanding graduate and awardee and we have no doubt that she will make the most of her time in the US, and bring all of this knowledge back to Aotearoa New Zealand for the benefit not only of the research community, but also her whanau, hapū and iwi”.

While in the US, Carrie will also be able to join the 2019 Biannual Native Children’s Research Conference as a speaker. She says, “I look forward to the opportunity to exchange experiences with Indigenous researchers and students from across North America.”

The Fulbright-Ngā Pae o te Māramatanga Graduate Award is for a promising New Zealand graduate student to undertake postgraduate study or research at a US institution in the field of indigenous development.

One award valued at up to US$40,000 (plus NZ$4,000 travel funding) is granted annually for up to one year of study or research in the US. Students undertaking multi-year Masters or PhD degrees have the opportunity to apply for additional funding of up to US$30,000 towards their second year of study.